This is a text widget, which allows you to add text or HTML to your sidebar. You can use them to display text, links, images, HTML, or a combination of these. Edit them in the Widget section of the Customizer.

Ever since the release of Dominion in 2008, deck-building has been an incredibly popular game mechanic. The mechanic allows players to take a relatively weak deck and customize it to their taste, replacing weaker tools with more powerful ones and better equipping the players to add even stronger cards, building toward the ultimate goal of accruing the most victory points. Since then, other games have built on the deck-building concept like Clank! (see our review here) or expanded on the idea, such as in the “bag-building” game Orléans, which we really enjoyed and intend to review down the line.

With Dice Forge, designer Régis Bonnessée puts a completely different spin on this engine-building concept. In Dice Forge, much as the name would suggest, players spend their turns customizing their dice, then rolling them to reap the rewards. And they do it in an efficient way using some impressively designed components.

There’s just something viscerally satisfying about rolling dice, and Dice Forge capitalizes on that. Seeing your dice growing more powerful with each turn is encouraging, and players really enjoy getting a high roll. And that’s one thing that Bonnessée’s appears to have recognized. One of the biggest complaints I notice with a lot of games is the amount of downtown for players. Dice Forge manages to avoid that problem, because even when you’re not the active player, you still have the opportunity to roll on each player’s turn and gain resources from your dice. That means that not only do you not have to wait for every other player until it’s your turn again—you can enjoy the benefits of upgrading your dice immediately (and frequently) as the game progresses.

My biggest complaint with the game is how short it sometimes feels. It’s not necessarily that it’s a short game, but with the 10-turn limit, sometimes it feels like you’ve finally gotten your engine for gathering victory points built only for the game to end before you can actually put it to its full use. While it does encourage players to be more efficient in their strategies, sometimes it feels like a little bit of a let-down right at the end. Your mileage may vary, however.

With art as vibrant as Dice Forge boasts, it’s hard to imagine, but I feel like the theme is where the game suffers the most. The game comes with a decent backstory behind it—players are taking on the roles of aspiring heroes in ancient Greece who are praying for divine favor and accomplishing feats of strength—but it doesn’t really come through in the gameplay.

The art is beautiful, but when you roll the dice, it doesn’t feel like what you’re doing is part of a story. It just feels like you’re rolling dice. Most of the cards don’t feel like you’re accomplishing feats of strength when you buy them—they just feel like cards you’re buying to get points. Dice Forge is the kind of game that could easily be reskinned without really impacting the play experience. Fortunately, the mechanics behind the game are solid enough that they don’t have to rely on the theme to be enjoyable.

Although Dice Forge might suffer a little bit on the strength of its theme, when it comes to the physical and visual design, the game knocks it out of the park. Every piece feels like it’s been exhaustively engineered. The cards are thick and feel good in your hands. Plus, they’ve got a nice, glossy finish that prevents them from sticking together. The player pieces are simple, wooden pawns, but they feel good in your hand, and they’re easy to tell apart from each other. And even if I’m not 100% sold on the theme, the art is absolutely beautiful.

The player mats are pretty neat. They use translucent, plastic cubes to track the resources you’ve gathered, and if you need to be able to hold more, they can even be expanded using one of the cards players can buy in the game.

It’s a cool way to keep track of things, but the fact that the holes go straight through can make things awkward if one of the players has to move to a different part of the table for any reason. It’s very easy to forget that the mats have no backs and pick them up, only to accidentally leave your cubes behind.

But let’s talk about those dice. 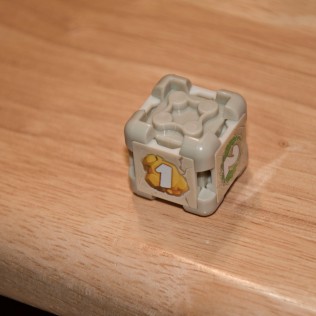 As you might guess, the dice in Dice Forge are the heart of the game. Each player starts off with two relatively weak dice, but each die is modular, with faces that attach like LEGO bricks. When a player needs to replace one of the faces on a die, the corner of the new face fits neatly under the old one and can be used as a lever to pry it off. Players can then replace the old face with one of 60 buyable faces from “temple.” 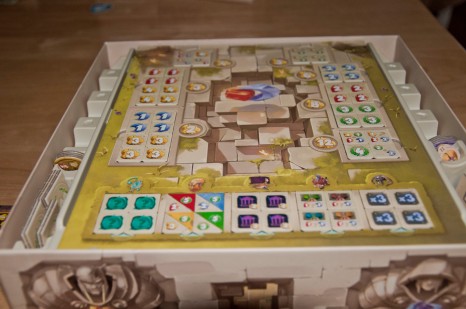 The way the temple, which serves as the “store” players can visit to purchase new faces for their dice, is designed is absolutely amazing. Essentially, it’s a double-layered cardboard sheet with impressions cut for the faces to rest snugly side by side. There are notches cut in alongside those impressions to make it easy for players to access them. But the really cool thing is this: 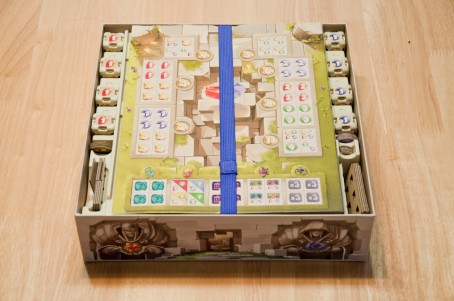 It’s such a simple, elegant solution. The game includes a sleeve for the temple sheet, complete with a diagram of where each of the 60 faces should go. The sheet slides into the sleeve and can be secured with a simple, elastic band. The band provides enough pressure to keep the die faces secure, even if the sleeve is knocked around a bit.

Guys, I store this game vertically, and when I pull it out to play, every single piece remains in place.

Okay, so finally, I never expected to be so excited about this part of the game, but I’ve got to say something about that insert.

A friend of mine and I have discussed it, and we swear that the insert for this game must have been designed by NASA engineers, because there is a place for literally every single piece. There’s a slot for each individual die, for each pawn, even for the first player token! The board locks into place, the cubes players use line up perfectly, and the cards even have separate slots based on where they should be placed on the board.

If you’re in a rush and don’t have time to organize everything after the game is over, there’s even a dump tray underneath the player mats where you can throw everything. But if you do that, I’m going to judge you and not even feel a little bad about it.

Setup is quick, especially if you put things away properly the previous time. Everything can be set up in less than 5 minutes. The game plays relatively quickly, too, taking less than an hour. I’d put the estimate closer to 45 minutes, or even as low as 40.

The basic mechanics behind Dice Forge are pretty simple: roll dice, collect resources, and spend those resources to build a point-generating engine. But as you introduce the different cards and dice face upgrades, it can start to get confusing. The cards only have vague symbols to explain what they do, with a more thorough explanation inside of the rulebook. Once you’re familiar with the game, these symbols work great as reminders of what the cards do, but for people new to the game, it can be a little intimidating. This also makes it take a little longer to teach than you might assume, because there’s probably going to be a delay as new players ask what each card does.

The very nature of Dice Forge gives it a great amount of replayability, because the dice are naturally unpredictable. There’s no way to know what a given roll is going to show, particularly when you consider that some of the faces you can add are actually affected by what you roll on your other die, or even what other players roll. Add in the fact that the custom die faces are a limited resource—some of the more powerful ones only have a single copy available to players—and you can be pretty sure that no two plays are going to be the same. 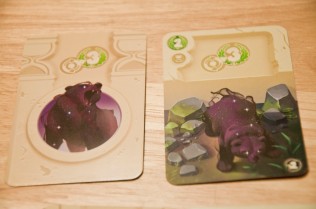 But there’s more to it than that. The game also includes more than one option of cards to include in your game. The game has a recommended set of cards for new players to use, marked with a small, blue gem in the bottom corner of the back of the card (see the image on the right, above). But, much like in Dominion, there are additional cards that players can swap in if they want to mix things up a bit on subsequent plays.

As much as I’d like the game to be a few turns longer and wish the theme tied in more, those are really my only major complaint against Dice Forge. It’s a lot of fun to play, and it allows for strategies without being 100% certain how things are going to go. Plus, like I said, this is one of the only games I’ve found where I’ve actually gotten excited about the box insert that comes with it. It’s incredibly efficient, and the game itself is an absolute blast to play. This is definitely a game I’ll bring to the table on a regular basis.